Last Saturday’s All England Theatre Festival Semi-Final saw adjudicator Tony Rushforth lead the audience in applause for the acting talents of Bob Charman of the Athelstan Players as they won through to the English finals!

Those of us lucky enough to be at the Barrington Theatre in Ferndown Dorset on May 15th were treated to a day of excellent theatre, culminating in triumph for The Athelstan Player’s Honeymoon Suite ‘Something Old, Something New’ by Tony Layton. The APs first won through at hj1act 2015 which you can read about HERE, followed by victory at the quarter finals, which you can find HERE . And now they’ve won the semi-finals they’ll be off to the English finals in  less than three weeks time!

Adjudicator Tony Rushforth of GoDA delivers his adjudications at the AETF Semi-Finals, The Barrington Theatre, Ferndown, 16th May 2015

Saturday’s semi-finals adjudicator Tony Rushford from The Guild of Drama Adjudicators praised The Athelstan Players ‘very polished’ production.  Tony was so impressed by Bob Charman’s performance as Jet, he paused mid-adjudication to ask the audience to applaud him!  ‘As Jet he was so convincing’ said Tony. ‘He performed with absolute truthfulness. It was poignant, moving;  this actor went on an amazing journey’.

Before seeing the play Tony admitted that he couldn’t like or identify with the characters on the written page and didn’t expect to be emotionally involved in the onstage storytelling. He was amazed to discover however that he was emotionally involved in the performance and this was due to the excellence of the performances, the honesty of the characterisations and the credibility of the production throughout.

‘Although it’s a light, gentle comedy, the play is deceptive too’, said Tony, ‘it’s a love story in hiding’. He went on to praise Natasha Gray’s performance as Pat, and Nicola Pearce Smith as Frances. ‘These actors had great honesty in bringing the characters to life with beautifully observed performances and very thoughtful direction’. 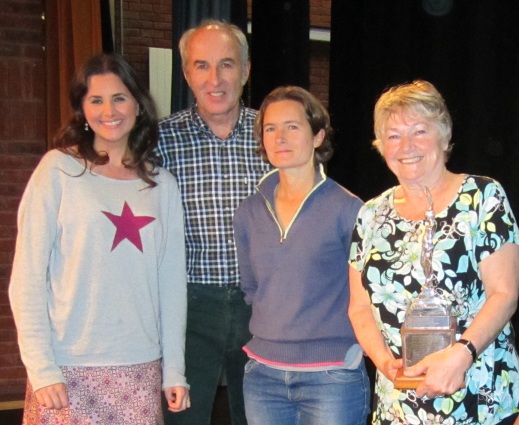 We caught up with Bob Charman to chat about The Athelstan Players Semi-Final winning performance and the upcoming AETF English Finals:

hjHQ: Huge congratulations! How do you feel about winning through?

Bob: A sense of pride and satisfaction – pride at representing Athelstan Players in the English Final, and satisfaction that all the hard work in realising the potential within this play has paid off. Also feel sorry for the other Western finalists – who no doubt put in similar efforts!

hjHQ: Did you ever think you’d make it this far?

Bob: I dared to hope….on first reading I felt there were all the right ingredients within the script – humour, pathos, light, shade, identifiable characters – it makes you laugh and hopefully it moves you too.

hjHQ: What have you learned from the Adjudicator? / How has the play changed during its performances?

Bob: To tell the story clearly and simply; to play within the room, not to the audience; better to cut than rush; move only with purpose; pause for a reason; and finally to avoid gratuitous vulgarity!! The play has evolved during this run – it is now several minutes shorter and is better for it, we have introduced a voiceover and lighting sequence that gives it a new dimension, and hopefully the relationship between the 2 main characters has achieved a deeper emotional connection.

hjHQ: How excited are you to be representing Wiltshire at the English Final?

Bob: 3 weeks to go and the butterflies are coming out of hibernation already – Harrogate is a PROPER traditional theatre, and its scale and the size of the audience will all add to the adrenalin – in short…VERY excited!

Thanks so much Bob! We’ll certainly be keeping a close eye on the English Final which takes place at The Harrogate Theatre Main House on the 6th of June. If you’d like to go and support The Athelstan Players at the final, you can plan your trip and find all you need to know HERE.

Congratulations to The Athelstan Players and Good Luck in the English Finals!

If you have a story you’d like us to include here in our blog, or if there’s something you’d like us to write about, let us know at hj1act@gmail.com  So long as it’s festival/drama/local theatre centred, we’ll definitely give it a look!

Please comment (all replies will be moderated) Cancel reply

If you have a question about the HJ1Act Play Festival that's not been answered in these pages, or if you would like to be kept in touch with developments, then please get in touch!